Location: Situated at Corner of Sateki and Lelue Road, next to the old Parliament House, opposite St. George’s Building.

Address: Situated at Corner of Kovana and ‘Onevai Road, opposite Maama Mo’onia Hall of the Free Weslyan Church of Neiafu.

Address: Situated at Corner of Tahi and Holopeka Road, opposite the Ministry of Education and Customs Office, next to Tau’akipulu Palace.

Address: Situated at Corner of Fangumalingi and Toatahakaeafe Road, next to Treasury and BSP Bank.

The Magistrate’s Court hears civil matters where the amount in dispute does not exceed $10,000. It also has jurisdiction in some family cases, including claims for maintenance under the Maintenance of Deserted Wives Act and the Maintenance of Illegitimate Children Act. It hears almost all applications under the Family Protection Act.

The work of the Magistrate’s Court is broadly divided between five divisions which are as follows:

This is the official website for the Ministry of Justice, Tonga. 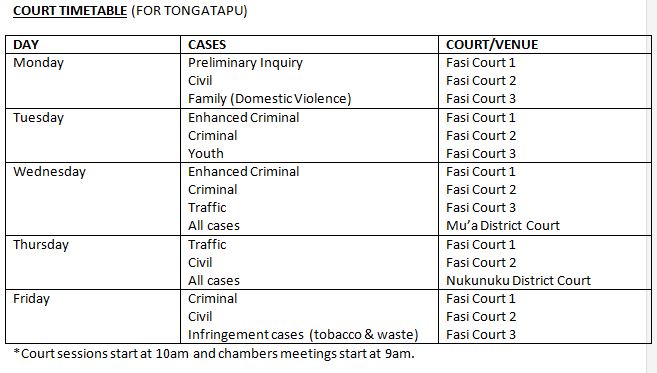 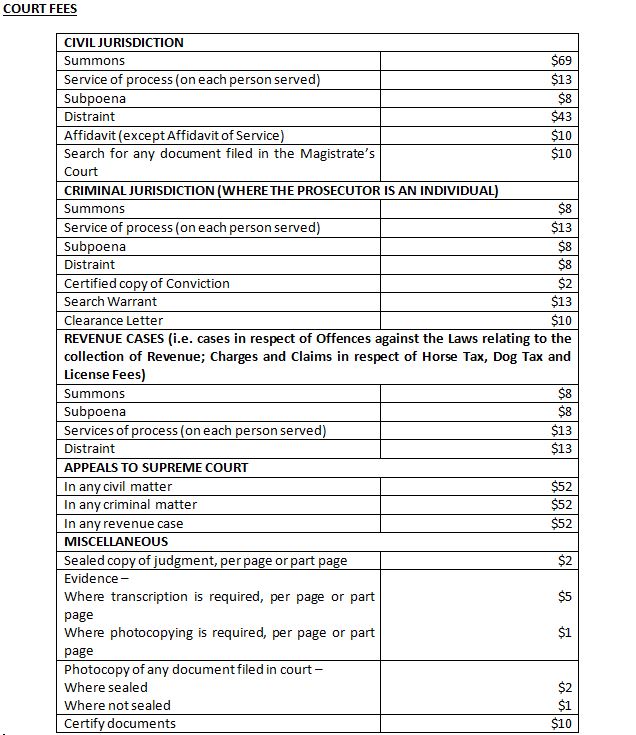 Any person who has been issued with a notice if found to have committed any of the above offences may elect to do either of the following:

Please be advised all fines can be paid to the Infringement Fines Section of the Magistrate’s Court located at Sateki Road opposite Talamahu Market (former Birth Registration/Bailiff’s Office).

Going to Court: What are my Rights and Responsibilities?

Role of the Courts

The Constitution of the Kingdom of Tonga establishes the Courts of law. The Courts are responsible for administering the laws in the Kingdom. These laws are either criminal (offences against the state, such as murder or theft) or civil (involving the rights of individuals, such as disputes about debts, land or agreements). It is the responsibility of the Courts to administer these laws independently, equally, impartially, fairly, honestly and competently.

In Tonga, the Courts operate in what is called the ‘adversarial system’. In this system, it is the parties’ responsibilities to present their cases, and the Court (being the Magistrate or Judge) to make the decision. This means that two sides (or parties) usually contest cases or disputes before the Magistrate.

Role of the Magistrate – making decisions

The Magistrate is the office of the Court who is responsible for deciding the case justly. The Magistrate has four key functions to perform: (i) to judge the facts of the case – what happened, (ii) to apply the law to those facts, (iii) to preside over the hearing to ensure it is conducted in an orderly and fair manner, and (iv) to make a decision or judgment, which is enforceable by law as an Order of the Court.

The Magistrate is independent and is required to treat both sides equally and fairly. For this reason s/he will explain to you what you should do at the hearing and how the hearing works. The Magistrate cannot provide any legal advice on your case – this is your responsibility: if you need help, you are strongly encouraged to consult a lawyer.

Role of the parties to a hearing

In criminal matters, the prosecution (usually the Police) brings the case (or complaint) against the accused (defendant).

In civil matters, the claimant (plaintiff) brings the case (claim) against another party (defendant).

Appearing in court and legal representation

As a citizen, you are required to appear in Court if charged with a criminal offence. You are also entitled to come before the Courts to exercise your legal rights and responsibilities. What is a right? A right is an entitlement that you have as a citizen that is enforceable by law. Should you wish to appear before the Courts, your rights and responsibilities should be clear to you before doing so.

In all cases, you have a right to legal advice and representation – that is, you have the right to be represented by a lawyer.

If in any doubt, you are encouraged to consult a lawyer for advice because the law may be complicated and you may require expert assistance. Should you choose not to exercise this right, you may appear in person. If you chose not to use your right to representation, you should understand that the Court’s decision is usually final and will be enforced by law.

You may obtain legal advice and representation from a qualified lawyer who will charge a fee. You are strongly advised to seek the help of a lawyer particularly if you are charged with a criminal offence punishable by imprisonment.

Appearing in court – telling your story: facts not opinions

If you chose to appear in Court without a lawyer, you should prepare your case carefully in advance. In Court, the Magistrate will explain the order of proceedings. Be sure to do what the Magistrate tells you. You will be given an opportunity to ‘tell your story’. Prepare this in advance: start at the beginning and present it in timely order. You should include facts (what actually happened), and not opinions (what you thought). You can bring witnesses to support your story or to contest that of the other party. In all cases, it is your responsibility to be honest and tell the truth and failure to do so is punishable.

If you are not happy with the decision of the Magistrate Court, you have a right to appeal. You must file your appeal within 28 days of the Magistrate making his decision. This is a strict time limit unless you are granted an extension of time to appeal by the Supreme Court. If you fail to file your appeal within the 28 days your right to appeal may be lost. If you appeal, you are entitled to be represented by a lawyer to conduct the appeal for you in the Supreme Court.

It is important to highlight some key differences between criminal and civil cases, these differences may affect your rights and the manner in which you exercise them.

Crimes are offences against the state (such as murder or theft) that are prosecuted by the Police before the Courts.

You have ‘fundamental rights’ when charged with a criminal offence, including:-

Burden and standard of proof in criminal matters

In criminal cases, the prosecution or police has the obligation to establish guilt (‘burden of proof’). Guilt must be established beyond all reasonable doubt (‘standard of proof’: a very high degree of certainty). You are not obliged to prove anything but you may contest the prosecution charge (version of events). If so, you may call your own witnesses.

If you do not understand the charge, you should ask the Magistrate to explain. If you ‘plead guilty’ (that is, admit the charge), or are found to be guilty by the Court, you will be liable for a penalty imposed by the law.

Civil cases are disputes over personal rights between individuals.

Burden and standard of proof in civil cases

In civil cases (or private disputes), the claimant (person bringing the case) has the obligation (‘burden of proof’) to establish their claim on the balance of probabilities (‘standard of proof’). The balance of probabilities means a probable degree of certainty or ‘more likely than not’. The defendant (person against whom the case is brought) may contest the claim, and may bring their own claim against the claimant (counterclaim) with or without witnesses.

The Court’s decision, which may include an order for damages and/or costs, is enforceable by law.

As explained above, the judicial process consists of an independent person (a Magistrate) conducting a hearing between two competing parties and ‘judging’ or making a decision on the case.

In civil cases, the plaintiff has the burden of proof to establish her/his case ‘on the balance of probabilities’ (the standard of proof is lower than in criminal cases: to a probably degree of certainty).

The Magistrate is responsible for conducting a fair hearing that is impartial, providing even treatment to both parties coming before the Court, and applying the relevant law and Court procedures.